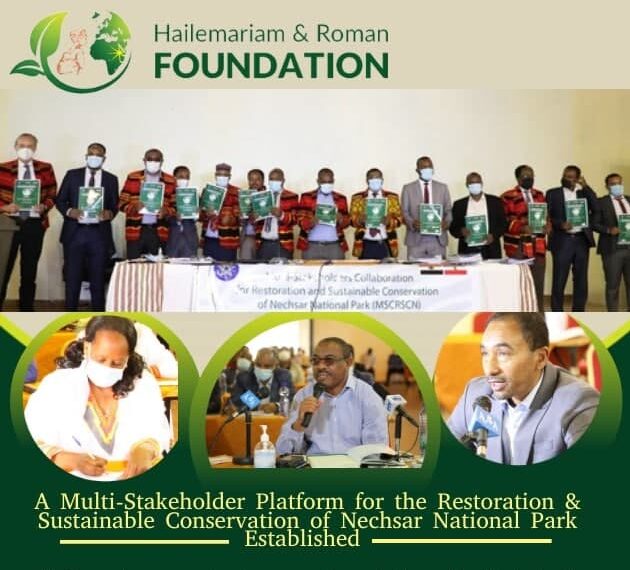 Nechsar National Park is one of the few protected areas constituting nearly 20% of the total biodiversity of the country. However, manmade and natural threats paused an existential danger on the wellbeing of Nechsar and its biodiversity. The increasing dependency of the surrounding community on agriculture and the continued encroachment into the Park are major factors causing environmental degradation and aggravating the loss of biodiversity in and around the park. The threat has also endangered the Arba Minch natural forest as well as the Abaya and Chmao lakes that account for nearly 15% of the National Park.

As part of its sustainable environment and ecotourism program, the  Hailemariam & Roman Foundation has been working on the protection, conservation, and sustainable management of the Nechsar National Park.  To avert the alarming threat on the park the Foundation called for the establishment of a coordination platform that embraces all stakeholders of the National Park. Accordingly, a multi-stakeholder platform that brought together 48 institutions including the SNNPR and Oromiya National regional governments,  federal and regional institutions, civil society organizations, and the private sector has been established.

The multi-stakeholder coordination platform aims to ensure the restoration and sustainable conservation and management of the Nechsar National Park through a community-centered and effective collaboration of stakeholders. The coalition will conduct evidence-based identification of the problems affecting the park and formulate short, mid, and long-term strategies to resolve them. A major focus area of the stakeholder collaboration is enabling the park communities to create alternative livelihoods to reduce their dependency on natural resources. Promoting tourism activities with particular emphasis on sustainable ecotourism is sought as one of the pathways for alternative livelihood development. These measures in combination with peaceful dialogue will contribute to a sustainable solution to resolve the problem of community encroachment in different areas of the park. Implementing integrated and community-based soil and water conservation measures around the park is another major plan conceived by the platform.

The multi-stakeholder platform is presided by Ethiopian Wildlife Conservation Authority while the Hailemariam & Roman Foundation (HRF) serves as the secretariat. The launching event of the platform held on 29 January 2020 was attended by  Honorable Almaz Melese; Chairperson of the House of Peoples’ Representatives Standing Committee on Agriculture, HE Hailemariam Desalegn; former Prime Minister of Ethiopia and Chairman of the Hailemariam and Roman Board of Trustees, HE Stephan Auer; Ambassador of Germany in Ethiopia, HE Ato Kumera Wakjira Director of the Ethiopian Wildlife Conservation Authority,  HE Professor Fekadu Beyene; Commissioner of the Environmental and Climate Change Commission, HE Ato Addisu Arega; Vice President of Oromiya National Regional State, Athlete Major Haile Gebreselassie and other dignitaries and guests. The representatives of the 48 institutions signed a memorandum of understanding affirming their membership of the multi-stakeholder platform and their commitment to working together to derive tangible results on the Nechsar National Park and the surrounding communities.