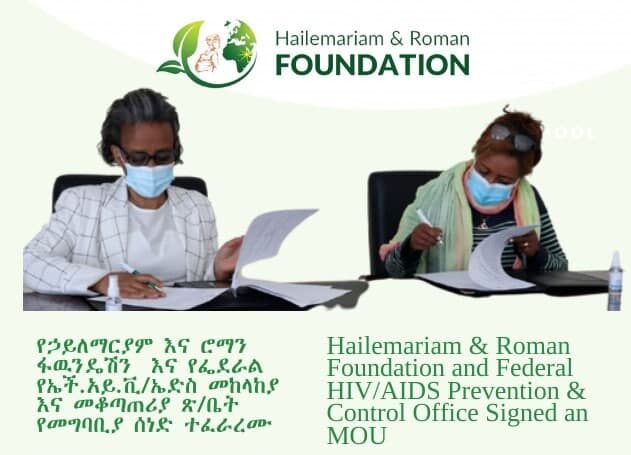 Hailemariam & Roman Foundation (HRF) and the Federal HIV/AIDS Prevention and Control Office (Federal HAPCO) have signed a memorandum of understanding to advance common objectives of combating HIV/AIDS and improving maternal and child health. The cooperation agreement was signed by H.E. Roman Tesfaye, former First Lady of Ethiopia and Chief Executive Officer of the HRF, and Dr. Tsigereda Kifle, Director General of  Federal HAPCO. The signing ceremony held on 3 February 2021 at the HRF’s head office was attended by senior officials and experts of both institutions. Speaking at the event, HE Roman Tesfaye reiterated that combating HIV/AIDS in areas most affected by the epidemic including Gambella is one of the programmatic focuses of HRF and reaffirmed the commitment of the foundation to continue supporting efforts geared towards attaining transformative results.  Dr. Tsigereda Kifle on her part stated that even though HIV prevalence has fallen below 1% at the national level as a result of concerted measures taken over the past decades, the prevalence in some parts of the country such as the Gambella region remains high. DR. Tsigereda affirmed Federal HAPCO’s readiness to collaborate with the Foundation to halt the spread of the epidemic.

The MOU establishes a framework for mutual understanding and partnership between HRF and the Federal HAPCO to strengthen the fight against HIV/AIDS with a particular focus on areas where the HIV/AIDS prevalence is high. The cooperation will contribute to the improvement of maternal and child health which is at the heart of HRF’s core objectives. Planning and implementing joint actions and model projects, mobilizing resources to finance and strengthen HIV/AIDS prevention and control efforts, improving the quality and accessibility of HIV prevention and control services in the areas with heightened epidemic by creating awareness, by building capabilities for effective service delivery and by promoting coordination and synergy among multisectoral HIV response stakeholders including identifying, documenting, disseminating and scaling up best practices are the key issues targeted in the cooperation.

In December 2020 HRF, the Ministry of Health, the Federal HAPCO, and the Gambella Region Health Bureau held a regional advocacy forum to improve maternal and child health and nutrition and to curb the speared of  HIV/AIDS in the region.  The MOU signed now between HRF and the Federal HAPCO is one of the implementation steps of the pledge made by the  Federal HAPCO’s Director-General at the forum to intensify efforts of combating the HIV/AIDS pandemic and to strengthen collaboration with stakeholders.