“We believe that community involvement in every development project in this pastoral domain is necessary to achieve the desired results.” H.E. Roman Tesfaye

Former First Lady of Ethiopia and CEO of the Hailemariam & Roman Foundation(HRF) H.E. Roman Tesfaye spoke with tribal leaders and ethnic chiefs from Hamer and Bena Tsemay Woredas about the pastoral community’s transforming reproductive, maternal, neonatal, and child health. The discussion was presided over by H.E. Roman Tesfaye, the Deputy Administrators of Hamer & Bena Tsemay Woreda, and a representative of the South Omo Zone Health Department. 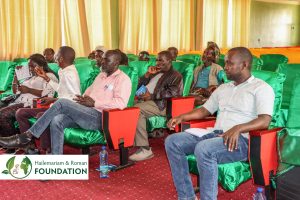 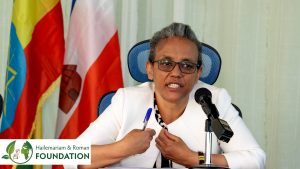 H.E. Roman was cordially received by tribal leaders and ethnic chiefs, and representatives from each ethnic group offered blessings in appreciation for the foundation’s multifaceted projects being carried out in this underdeveloped area of the country.

Her Excellency highlighted the remarkable improvements in maternal and child health as well as the decline in harmful practices following the advocacy conference held in June 2022, in Hamer and Bena Tsemay Woredas. “As this outcome is yours, on behalf of HRF, I would like to express my heartfelt respect and honor for the active engagement of ethnic and tribal leaders,” she added.

“HRF has organized this training session with you as the most important stakeholder because we place people at the center of all we do and believe in the value of local communities. We also think you’ll play a key role in further solidifying the favorable results that have already been recorded as part of our agreement from the prior advocacy conference, and we hope you’ll strengthen your commitment to supporting our efforts to address the problems that haven’t yet been resolved in terms of reproductive health, maternal, neonatal, and child health,” H.E. Roman said. 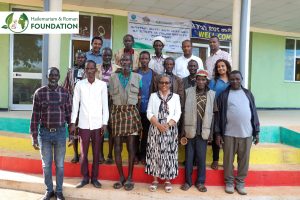 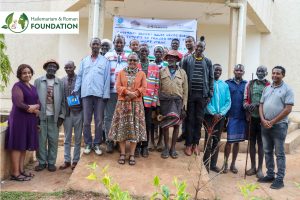 The ethnic chiefs and tribal leaders appreciated the support of the HRF and government bodies which brought about positive change in their community lives. They spoke of significant advancements they had made by enrolling children of school age, allowing expectant mothers to give birth in health facilities, persuading their community to stop engaging in harmful practices, and likes. Eventually, they made a pledge to educate their community and to take the initiative to improve the issues around maternal, neonatal, and child health that were prevalent in their area.

According to ethnic chiefs and tribal leaders, the lack of health centers in some Kebeles, lack of ambulances, shortage of vital drugs in health facilities, and the need to find a way to provide mothers with meals in the delivery waiting rooms of all health facilities are issues that has to be addressed.

In response to the concerns raised by the community leaders, representatives from the Woreda Administration and Zonal Health Department reiterated their commitment to collaborate with their management team and deal with the issues expressed.

In her closing remarks, H.E. Roman thanked everyone who attended the session to help find solutions to issues involving mothers’ and children’s health. In addition, she pledged that the HRF would continue to support issues pertaining to health, environmental protection, ecotourism, and the economic empowerment of women and young people in these underdeveloped pastoral communities.